After the Coles dominated the Oaks having all 8 runners in the final, the Coles go into the final of the NZ Derby (greyhounds) with the clear favourite.  Race 11 is off at 9.06pm Thursday.

Bigtime Cooper (5) is the clear favourite and could easily start at odds on by start time.  He’s opened at $2.15 based on his heat win where he had the fastest opening sectional and the fastest overall time.  The distance is ideal and he has a strong record over the distance at Palmerston North.

He is a pretty reliable beginner and it’s his early speed that sets up his wins.  He’s 4 from 8 from box 5 which is likely the biggest flag.  As we often say, box speed is gold so the dog that can get in front at the first time has a massive advantage, especially if there’s any trouble behind as happened last year.

All things being equal, then Cooper jumps and wins.

That said, it is a final and this will be a competitive race with the best young dogs battling it out.  If Cooper does miss the start, who’s best positioned to benefit?

The speed map likely holds the key.  Inside Cooper, there’s a couple of slower dogs so in theory, Cooper needs to bomb the start but stranger things have happened.  The two likeliest to benefit in my opinion are Thrilling Morris (2) and Leonard Bale (8).

Leonard Bale brings extremely strong form into this.  Prior to his second in the heats 3.8L to Cooper, he won 5 straight over 520m at Addington including C5 races.  He’s 3 from 3 from box 8 as well.  He’s currently $5FF and second favourite.

I think the value runner is Thrilling Morris.  His heat time was just 0.02 seconds slower than Cooper.  The opening sectional was .1 slower but Morris was stronger through the closing sectional running the best closing sectional of the night.  He’s currently paying $8FF which looks great value based on his sectionals.

All goes to plan – Bigtime Cooper (5) 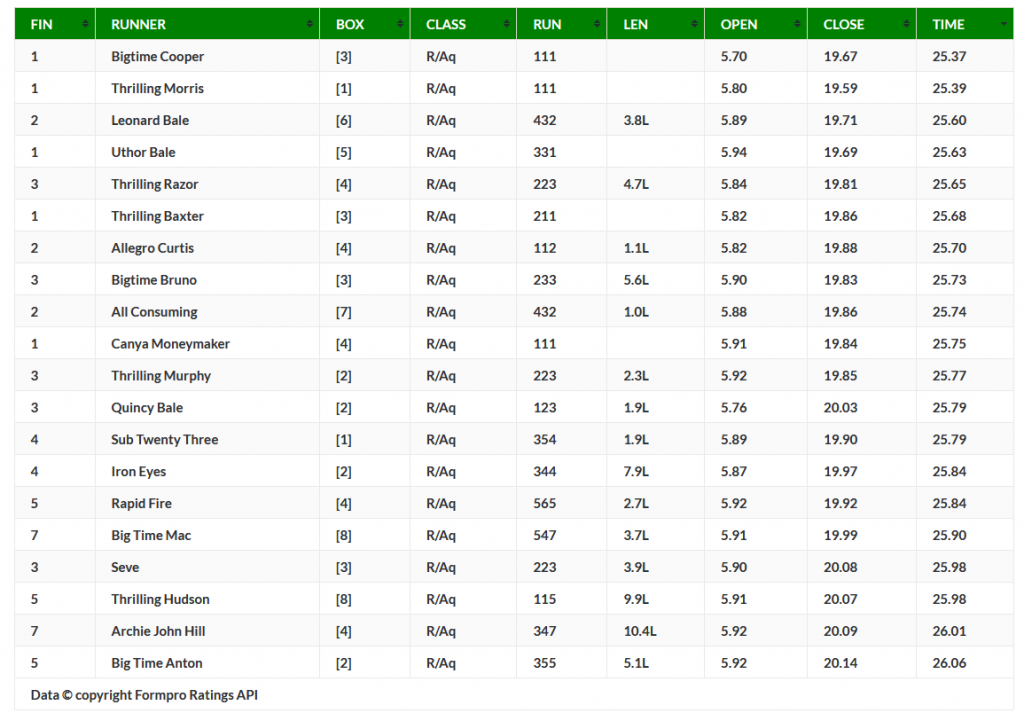