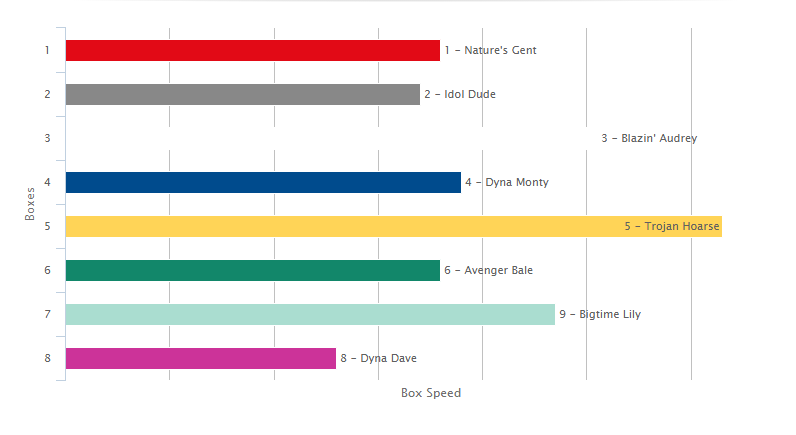 We’ve been spoilt with some great greyhound racing in recent months and we are spoilt with an intriguing edition of the Hatrick Classic on Friday night.

What makes this race so fascinating is that it looks like a race of two halves with a couple of runners setting up the early pace while a couple of the favoured dogs look to have swooping claims.

So while box stats are obviously significant, our stats consistently show that it’s position in running that matters the most.  Good box speed can mitigate bad draws while the converse is also true.

Over the 520m at Hatrick nearly 40% of winners have led at the first bend, while the winner has been either first or second in more 60% of races.  At the other end of the spectrum, since 2011, just 15% of races have been won by dogs who were 5th or worse at the first bend.

The three Lisa Cole-training dogs map to lead out with Blazin’ Audrey in box two and Trojan Horse (5) in the yellow rug having the best early speed.  The emergency Bigtime Lily is likely to press up on the outside of the Trojan Hoarse with potentially a line of three at the post the first time.

Trojan Hoarse has twice recently broken 5 seconds for the first sectional and if she could do that again she puts herself right in this race.  She hasn’t the strongest closing sectional but, to be fair, she has got stronger over the 520m at Hatrick in recent weeks.

The speed map also suggests that Nature’s Gent has a chance to push up from box 1.  He doesn’t have electric speed but the map suggests he’s a chance to claim the rail and we know how strong he is over the closing stages.  He has a great record from box 1 with 4 wins from 8 starts in NZ.

Avenger Bale (6) was able to land on the pace in his heat but while it’s a little harsh, the sectionals suggest it was because most of the field was slow away.  He may not get such charity in a final!

It’s hard to go past Nature’s Gent.  He has the kindest box draw he’s received for a few weeks and the inside draw could be a great help.  He doesn’t rely on winning the early speed battle but he certainly can put himself into early contention.  The concern is that Blazin’ Audrey could cross but she’s not generally a hard railer and Nature’s Gent could find space on the rail.

For longer odds, I think Trojan Hoarse could be great each way value.  If she picks the jumps like she has in the past, she has the ability to put a length or two on the rest by the time they reach the winning post the first time and then any trouble at the start will play into her paws.  It would be no surprise to see her gunned down over the later stages of the race but they will still need to catch her.

Based on the speed map alone, Blazin’ Audrey has to be in calculations.  She’s one runner who can feature in the early rush but also has a strong closing sectional.  The concern is that she can lose concentration and perhaps not show as much tenacity as some of the other runners.

Of the swoopers, Dyna Dave and Avenger Bale have the best closing sectionals, with Idol Dude next.  As I mentioned, Avenger Bale’s opening split last week was not fast and he risks having Trojan Hoarse on his inside and the emergency Bigtime Lily on his outside.  If that happens, he’ll need a lot of luck.

Box 8 doesn’t have a great record but Dyna Dave does have great stats from the outside boxes.  With three runners heading towards the early lead anything could happen and box 8 could be an advantage especially with his proven Swooping ability.