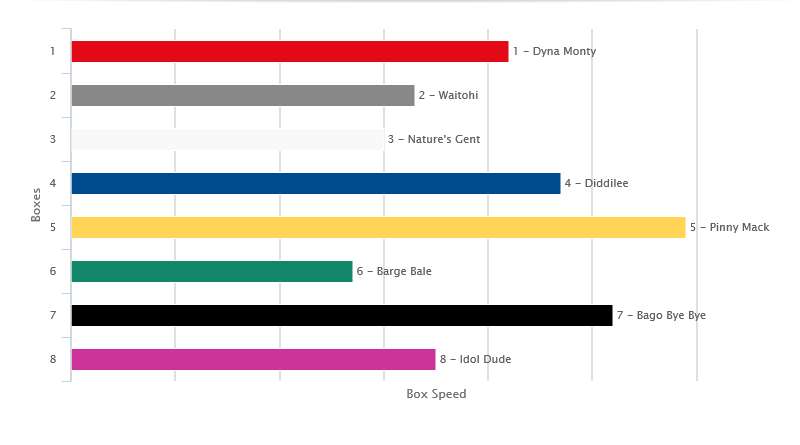 Christmas is a time for crackers and we have a cracker of a group one race out of Hatrick tonight.  The heats were filled with drama and it sets up a fascinating final tonight.

However, as we will see, these are just averages and the value of a particular box draw depends on the running style and preference of each runner.

Over the 520m at Hatrick nearly 40% of winners have led at the first bend, while the winner has been either first or second in more 60% of races.  At the other end of the spectrum, since 2011, just 15% of races have been won by dogs who were 5th or worse at the first bend.

The exception to this rule is where there is trouble at the start which allows some dogs to sidestep danger.  With the draw we have, this is a real possibility this year.

Compared to some races, there’s not a huge amount of early speed in this race.  The speed map shows Pinny Mack (5) and Bago By Bye (7) – the two favourites – leading.

Both have had their tribulations.  Bago Bye Bye hasn’t raced from outside box 6 in NZ while his last 5 starts have all been from box 5 or closer.  Pinny Mack has generally been getting away well, as you would expect from the speed map, but famously slipped at the start in the final of the Amazing Chase.

The real drama will be on the inside.  Dyna Dave (1) at his best is right in this.  However, as soon as the box lids are up, he’s have his right indicator on and will move right.  Box 5 assisted in the heats, as did a dog on his immediate outside providing directions.  On the other hand, Diddilee in box 4 is likely to be heading towards the rail.

The dogs in boxes 2 and 3 are generally slow away which could work out for everyone.  The question will be what carnage if any will happen at the start? Bago Bye Bye was lucky to avoid a major fracas in the heat.

Based on the speed map, it’s hard not to think that the winner is likely to come from Pinny Mack or Bago Bye Bye.

The downside for Bago Bye Bye is the outside draw but as we noted it may work in favour of both runners if they can avoid any problems on their inside.

On the other hand, Pinny Mack needs to show some improvement from last week’s run – his closing sectional wasn’t particularly strong and you think that if it comes out to a match race between the two favourites, then Bago Bye Bye will be too strong in the closing stages.

Dyna Monty has the raw ability to win this race but the draw and the speed map does worry, especially with Diddilee in box 4.

The value runner looks to be Waitohi in box 2 currently paying $25FF.  Generally, the slow draw works against him but you can see a scenario where he is slow away, crossed by Dyna Monty and there’s dogdems in the middle of the track.  Meanwhile Waitohi could get a lovely run along the rails and was we’ve noted, he has a top closing sectional in him.  He’s also boxed to suit tonight – box 2 is clearly his best draw.

It really depends on the start – if either of the favourites miss the start, then everything changes.