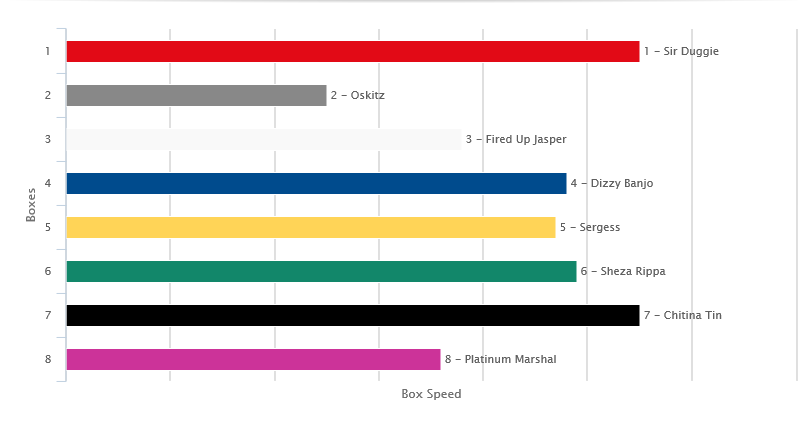 The main event on tonight’s card is the $125,000 NZ Cup.  This race will be every bit as competitive as the earlier Galaxy sprint.

Like the sprint distances, there is a bias towards the inside boxes.  Box 1 has the best strike rate at 18% with box 2 next around 15%.

The outside three boxes have the worst records with both box 6 and box 8 finding less than 10% of winners.

While there may be a perception that in longer races, in run position is less important, the stats show that this is not the case.

Almost 50% of winners at Addington over the middle distance are the leaders with a lap to go.  A further 22% are second.  So in three quarters of 520m races, the winner will be first or second at the first bend.

At the other end of the spectrum just 11% of races over 520m have been won by dogs fifth or worse at the post the first time around.

The speed map shows that many of these dogs are used to dictating terms.  This is to be expected – as we’ve seen with the in run position stats, box speed is gold in middle distance races as well as sprints.

Bago Bye Bye (1) and Pinny Mack (2) consistently race on the pace while Blazin’ Carter had the two best opening splits during the qualifying rounds and could well lead from box 6.  Dirk Bale is the other runner likely to be pressing forward from the start.

Dyna Dave (4) in particular is a runner who can get back in races so will have it all ahead of him.

Clearly the start will be key here, just as much as in the earlier group 1 sprint.

A lot depends on what happens with the two favourites.

Bago Bye Bye has run some phenomenal times and is having just his third race in open class.  On times alone he wins but he has been a stride or two slow in three of his previous five races.  He’s had the class to make amends but if he misses the jump in this field he could be in trouble.

Same with Pinny Mack.  However, as the speed map shows, Pinny Mack has the advantage of a couple of relatively slower dogs on his immediate outside.

To spice things up further, as was mentioned on Dogzone last night, Bago Bye Bye has a tendency to wander away from the race after the start.  If he pushes out round the first bend, this could cause problems not just from Bago Bye Bye but also Pinny Mack.

However, while it’s possible that both Bago Bye Bye and Pinny Mack could blow the start, you would expect one of them at least to be on the pace at the first turn.  If Bago Bye Bye can hold the rail, then his closing sectionals are so strong that it will be all over.

Pinny Mack can still win but his closing sectionals aren’t the strongest so he will need to get a clear break on the favourite and hope that Bago Bye Bye runs into some transit issues.

The bookies have these two as the dominant players in the race and it’s hard to argue with that.  They only way they can be beaten is if they blow the start so for cover and a bit of value, I’d throw Blazin Carter into the mix.  Based on the speed map and sectionals, he looks the likely leader.  If he can get a break at the first bend then he could hold on to for a place.

Look for Dyna Dave to be making ground late too although with his box speed it’s hard to see him in the mix to win.