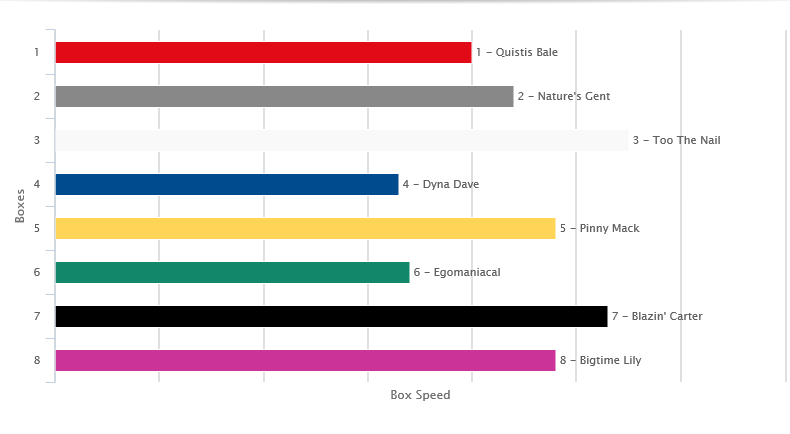 With the Abba revival showing no signs of abating, it’s appropriate that the next group feature for the NZ greyhounds is the Waterloo Cup at Manukau on Sunday.

Clearly, more than one runner will be hoping you will take a chance on them to make some money money money!  In a group race, the winner takes it all.

The feature race is race 10 on on the card and the lids are expected to go up at 3.54pm.

The Waterloo Cup is rare in that the heats are run around the country, although this year there were two heats at Manuakau, one at Addington and the fourth at Hatrick in Whanganui.

Typically, we normally see dogs running a circuit so they often run against each other.  With the conditions of this race, we have qualifiers from three courses spread around the country.

There’s a bit of a bias to the inside three boxes.  Box 1 is the most successful with over 17% of winners while both box 2 and box 3 are at almost 14%.

The other 5 boxes have similar chances although box 6 is the least successful with just over a 1 in 10 success rate.

The favourite Pinny Mack is drawn in box 5 which could be significant in the final analysis.

“In run position” is just a fancy way of saying where each runner ends up at the first bend.

And here we go yet again.  We make this point any race – in run position is a significant predictor of likely success in greyhound racing, regardless of the distance.

The winner will lead at the winning post the first time around in 42% of middle distance races at Manukau.  83% of winners will be in the first 4 with a lap to go.

Again, it simply highlights how important it is for dogs to have box speed to put themselves into a winning position.

The saying “box speed” is gold can’t be underestimated in any greyhound race.

The map shows that the early speed is likely to come from Too The Nail in box 3 and Blazin’ Carter in box 7.  Nature’s Gent doesn’t necessarily have lightning speed from the boxes but the dog drawn inside doesn’t look like a natural box 1 specialist.

The bookies have Pinny Mack (5) as a clear favourite at $2.25FF and he’s unbeaten in his last 5 starts.  So on paper he looks a great chance.

However, there’s a case to say he’s under the odds given four of those five starts have been from boxes 1,2 or 8.  The speed map shows he is in the mix but he generally takes a few strides to get into gear.  Only once in his 6 NZ starts has he been first at the first marker.

Not surprisingly, his ratings from the middle boxes haven’t been as compelling from the inside or outside boxes.  He still has to go into the mix but I think he’s a risk given the draw and I would rate him more like a $3 shot.

I do like Nature’s Gent (2) from the inside.  He’s shown the ability to grind away on the rail and was only just beaten in the last stride in this heat.  He’s currently at $4.20 which is attractive odds for a dog of his class.

The bookies have Dyna Dave (4) on the third line and he does look a chance.  The concern as we saw with the speed map is that he maps to get back and in this type of race, will need luck.  He got a clear enough passage in the heats but will need to rely on the same again.  Bookies have Dave at $4.20.

One at big odds is Too The Nail (3).  He’s currently paying $21FF.  Racing out of the Fahey kennels is reason enough for him to be shorter than that.  The speed map also shows that he’s got as good a chance of any to get on the early pace and then if there’s any trouble behind, puts himself in the box seat.  On the downside, it’s his first look at Manukau and he may not be the strongest at the close but he could be a runner to spice up exotics.

If the draw favoured Pinny Mack, he would be a deserved favourite but given the way the runners are boxed, I’d put Nature’s Gent on top.

Reviews are a lot easier to write AFTER the race.  As it panned out, Nature’s Gent was slow out, Too The Rail headed left and the TMO was looking for a head high tackle and Pinny Mack took off like Rieko sniffing the tryline.  The forgotten dog was the dog in black – how apt! – and Blazin’ Carter (who wasn’t in the 10) got a wonderful drag into the race.  But all honours with the winner who was a class above them today.