Over the last few months, a lot of my focus has been on the back end processes and the migration to the new platform.  It’s fair to say there’s still a bit of work to do but we have the basics in place and are slowly working on improvements and enhancements.

Hopefully, a little more time will allow me to do some more analysis and reviews.

So in that context, it’s most likely worthwhile having a look at the big meeting from Saturday at Hastings and specifically the role of the speed maps.

I think it’s fair to say that it became evident early on that there was an advantage to being on pace.

That is an understatement when you look at the race results: 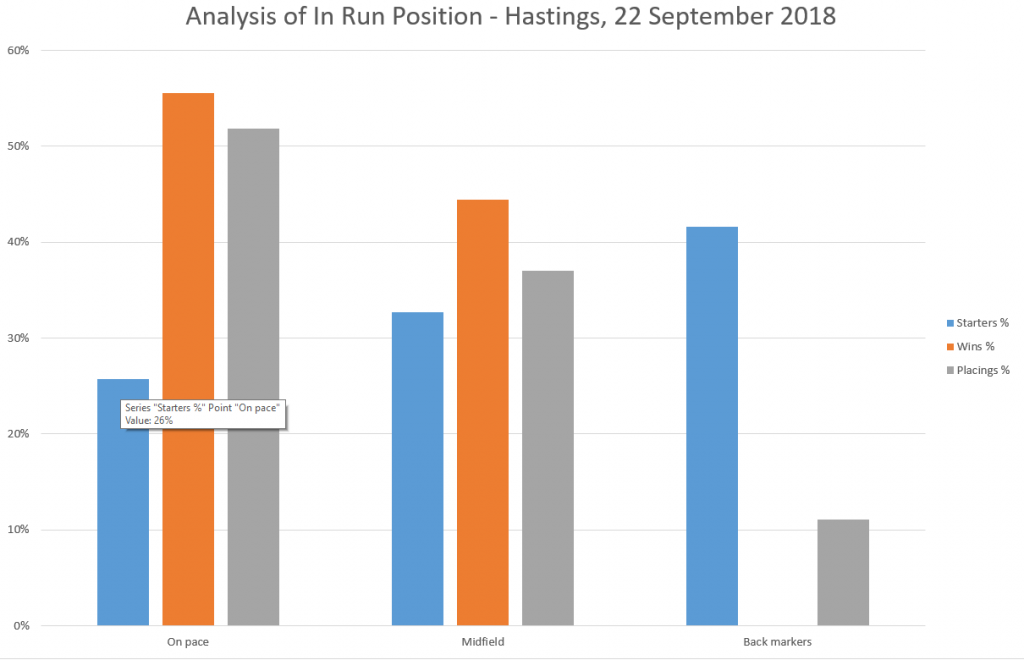 It’s also worthwhile looking at the barrier draws.  While it’s a lot more difficult to argue that the draw alone is a significant factor, coupled with other factors it can be a consideration.

Of the 9 races, 4 races were won by runners who drew 1 or 2 while the widest successful barrier was Amarula who drew 9.  Significantly, Amarula pushed up into a handy position as the speed map suggested and was in the right place to win.

It would have been a tough decision on the day too.  If runners jagged back from an outside draw, then clearly as we saw there was little chance to make ground from the back.  Conversely, some runners did try to push forward from wide gates eg Contessa Vanessa from barrier 14 in the group one.  She’d had enough by the 350m.

How did the Speed Maps go?

It’s always easy to find winners after the race, but the speed maps certainly helped find the winners.

There were a few runners who managed to buck the trends and could be worth following – but see the caveat below.

And the caveat about swoopers and late closers.  While runners like Sheriff stand out, the problem of course is that backmarkers have statistically less chance of winning than other runners.  The explanation is obvious as back markers are likely to run into more trouble than other runners while they also need the race to be run and a tempo that suits.

Still a great day of racing and hopefully we can find a few winners from the review as well.